Intoxilyzer 8000 operates on a principle known as the “Lambert-Beer Law,” which states that the amount of infrared light absorbed by your breath is proportional to the amount of alcohol in the sample. Think of it like the way in which fog will block your car’s headlights on a damp night. In short, the more alcohol there is, the less infrared light that gets through the chamber to the detector. 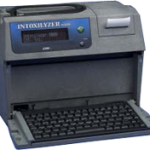 The Intoxilyzer has a lamp which generates a broadband infrared beam. The broadband infrared beam passes through the sample compartment. The beam is centered by a lens onto a revolving filter wheel. The filter wheel has narrow band filters theoretically made to read the wavelengths of the bonds in ethanol. Light passes through each filter. That light is identified by the photocell. The light is then converted to an electrical pulse. The electrical pulse is sent to the microprocessor which purportedly reads the pulse and then estimates one’s BrAC. This estimate is based on the absorption of the infrared light.

Another concern with some of the present breath testing machines is that they can read in the 3.x-3.8 micron range. This is where the Methyl (CH3) group provides a strong absorption. This is also where a lot of hydrocarbons absorb infrared light. Methanol and Isopropanol, and a few other chemical substances such as menthol and D-Limonene, and others, provide highly enriched false positives on breath test machines. These are a few of the many interferents evidenced in San Diego DUI courts.

The infrared could be blasting through exhaled breath molecules in a San Diego DUI breath test chamber, or the finger of the San Diego breath test arrestee. The critical question, regardless, is where the infrared detector is reading. Any machine will have to theoretically have sufficient points to distinguish ethanol from all other potential interferents.

Specificity and calibration are a couple of the central San Diego DUI issues. Check to see if appropriate reviews are performed. If the machine is specific to ethanol alone, then there should be no problem. But if they pick the wrong points to read, or too few, or ones with potential interferents, then this will just be another problem. And that is often the case. Fat concentrations may also be an issue. There are many possible San Diego DUI breath testing issues and problems.ever, there are other compounds, called “interferents,” which can also block the infrared. And the Intoxilyzer cannot reliably tell them all apart!! !!

Draeger Corporation has reportedly developed an even better machine. But San Diego County does not have a Draeger machine.

Draeger and Intoximeter purportedly adopted a newer approach to DUI breath testing evidentiary units. Latest instruments theoretically utilize both an infrared detector and a fuel cell sensor combined in one intricate unit. Both values have to be congruent before the DUI breath test results are displayed. They further attempt to use infrared measurements in both the 3 & 9 micron ranges, to purportedly isolate the fingerprint of ethanol.

The temperature sensor built into the Draeger instruments may potentially be prudent, given the possibility the lung temperature may adversely affect true BAC (Blood Alcohol Concentration) readings. Improvements by Draeger can only validate the testing process, and will hopefully be refined in future machines.

There’s the possibility of creating a machine that would utilize an infrared penetration of energy through the skin of the test subject. The blood alcohol reading would be obtained from the mixed arterial, capillary and venous blood in the extremity. One would have to determine an appropriate frequency to use, one that was specific to ethanol without providing a false-positive reading from interference with blood, oxygen, carbon dioxide, skin, bone, etc.

A possible advantage would be its potential ability to obtain a true BAC without converting from a BrAC (Breath Alcohol Concentration) reading. There would theoretically be no delays in use, extrapolation of a BAC from a BrAC using a partition ratio, no invasiveness in the testing procedure, and little inconvenience. Interferents could possibly be better managed by the prospective use of a number of frequencies, theoretically one each for the commonly misread substances.

Now, a machine developed by TruTouch Technologies of Albuquerque, N.M., and named one of the top inventions of 2006 by Time magazine, uses near-infrared light to detect alcohol in a person’s system. It reportedly distinguishes differences in skin to match up registered users and prevent fraudulent readings. Here’s how the simple technology works, according to TruTouch’s amazing Jim McNally, Ph.D.: Body tissue with alcohol in it absorbs more light than normal tissue without alcohol. The machine shines light against the skin of the forearm and analyzes how much light is reflected. Think of it like a flashlight. You push it against your skin, and your skin glows. It’s the same principal, but with … an element that gives a broad spectrum of light.

The TruTouch 1100 employs near infrared spectroscopy to measure alcohol and verify identity. The measurement involves transmitting light into the skin via contact with an optical fiber sensor. The reflected light is analyzed to determine the alcohol concentration and to verify the subject’s identity.

TruTouch has conducted numerous human alcohol dosing studies including ones sponsored by the NIH that confirmed measurement accuracy comparable to today’s breath technology.

Noninvasive Technology As Compared To Other Testing Methods

Presently there are many technologies used for alcohol testing, and all of them require: a sample of a bodily fluid, the use of a disposable, and close supervision. Most testing methods are cumbersome, require test subject cooperation, and are not capable of producing simple, minimally supervised screening with fast turnaround of test results. None can provide identity verification as an integral part of the test. These limitations have hampered widespread alcohol testing from penetrating many opportunities outside of law enforcement. The result is that the markets are underserved. There is no lengthy observation period (as with breath devices due to “mouth alcohol” concerns) or waiting for results (as with blood and urine tests).

The newer technology could possibly work ok. Pulse oximeters, by comparison, seem to work alright, albeit for a different purpose.

Science and technology constantly advance, with new ideas or models rising to deal with older notions (e.g. how to full-proof deal with so many potential interferents). In school, we learned Pluto was a planet in our solar system. Now it is believed to be merely a rogue planetoid/asteroid/big rock just orbiting the Sun. We used to believe it was a planet, now it is really just a cartoon dog at Disney World. The existence of interferants has clearly been substantiated.

The Intoxilyzers, Intoximeters & others will be replaced as these current machines seem relatively antiquated.

Research further reveals the Intoxilyzer’s mouth alcohol detector is not entirely reliable, receiving readings as high as .18% when testing subjects with dentures. “The (mouth alcohol detector aka) slope detector was never intended to be a substitute for residual mouth alcohol detection and prevention protocols such as a pretest alcohol deprivation period.” [See e.g. Harding, P., McMurray, M., Laessig, R., Simley, D., Correll, P., Tsunehiro, J., The Effect of Dentures and Denture Adhesives on Mouth Alcohol Retention, Journal of Forensic Science, 1992, 37:4; pp. 999-1007, p. 1006.]In any event, for any machine, the so-called mouth alcohol detector does not guarantee the absence of mouth alcohol concentration. Only a biased or naive prosecution expert relies on the purported detector to: a) always function, and b) always detect mouth alcohol contamination. Which is the reason why the manufacturer and the State of California both still require a minimum 15 minute continuous observation / deprivation period prior to properly testing a San Diego DUI arrestee.

The Florida Department of Law Enforcement’s inspector recently admitted that the results of several 8000 machines are scientifically unreliable. In some cases, the Intoxilyzer 8000’s print-outs fail to disclose that an inadequate breath volume was tested on the accused driver. An 8000 is not a perfect machine; it’s just the next numbered model in a series of older machines.

Florida Assistant State Attorney Earl Varn has asked the courts not to accept any pleas on DUI cases involving the newer ntoxilyzer 8000 breathalyzer. “We would ask the court to enter a not-guilty plea,” Varn stated in a memo to Sarasota County Judge David Denkin, “and set any new cases for a pretrial date.” Varn stated that his office needs more time to review the 8000’s reliability. Venice attorney Robert Harrison has been at the forefront of the respectable breathalyzer challenge. “It is actually is a very smart and prudent move by the state,” Harrison said, “because right now anybody who has been convicted or pleads guilty has the possibility of coming back and saying, ‘I entered a (guilty) plea (after the breathalyzer results) but the state didn’t tell me they were having problems with it.” According to Laura D. Barfield, Florida Department of Law Enforcement Alcohol Testing Program Manager, the machine will post unreliable results if the subject does not blow a minimum of 1.1 liters of breath into the machine within three minutes. The software is not instructed to report a “Volume Not Met” flag, Barfield stated, if the subject breathes less than 1.1 liters of breath into the machine. In a letter to the Sarasota County Sheriff’s Office which operates the county’s five breathalyzers, Barfield claims FDLE “discovered” the volume problem, when in fact Harrison’s research was responsible for uncovering the issue. “If the state found it and didn’t tell us,” Harrrison said, “that could be an even bigger mess which could have civil rights implications.” FDLE is responsible for breathalyzer operations in Florida. Barfield also wrote that the anayltical functions of the 8000 are not affected by the volume issue. She said there will be a software revision to correct the volume problem.

Barfield said the volume problem only showed up in a “small number of breath samples.” Harrison said FDLE has discovered at least 189 cases of Intoxilyzer 8000s reporting “suspect” volume results. “If somebody registers a .277 and they didn’t blow into the machine (an incident supported by FDLE’s own data),” Harrison said, “that is indefensible.”

There are a number of reported 8000 problems – see http://www.duikeywest.com/secrets_of_the_intoxilyzer1.html

It is difficult to fathom why San Diego DUI law enforcement fails to use the very best available breath testing machine when one’s San Diego DUI proof of guilt beyond a reasonable doubt is in question.

These issues continue to be raised by an honorable San Diego DUI Lawyer .