Blood alcohol concentration, also known as BAC, is the measurement of the percentage of alcohol in a person’s bloodstream. For example, at a BAC of 0.10, your blood composition is 0.1% alcohol. All fifty states have set 0.08 as the legal definition of DUI impairment, which begs the question, after how many drinks are you considered legally drunk?

What Influences Your Blood Alcohol Concentration?

Unfortunately, there’s no such thing as a fixed number. Many circumstances contribute to your blood alcohol concentration. The following represent a few factors you should consider before your next night out:

Even with an equal body weight, women become intoxicated at a quicker rate than men. Alcohol spreads throughout the water of a human body when consumed, and men’s bodies have a higher water percentage than women’s bodies. Therefore, even if both a male and female drink an equal amount, the effect is similar to putting the same amount of alcohol into a smaller bucket of water (female). In addition, women have lower levels of alcohol dehydrogenase, the alcohol-metabolizing enzyme. More alcohol therefore goes directly into a woman’s bloodstream rather than first into the stomach.

The body is able to break down 0.5 oz (14 g) of ethanol per hour. A standard drink (one 12 oz beer, one 5 oz glass of wine, or one 1.5 oz shot of distilled spirits) contains 12 grams of ethanol. Therefore, the average person is able to process approximately one standard drink per hour. Can’t a cold shower or a cup of coffee be the quick fix? Unfortunately, time is the only cure for sobering up.

Drinking alcohol on an empty stomach seals the fate of many. Alcohol, unlike food, passes quickly into the bloodstream because it doesn’t need to be digested. It is then quickly dispersed throughout every part of the body. When one eats along with drinking alcohol, his or her BAC will be much lower because food causes alcohol to enter the bloodstream at a slower pace.

Several other factors such as how often you drink, the amount of sleep you’ve had, and of course the number of drinks you’ve consumed contribute to your blood alcohol concentration. The following graphic from Aware Awake Alive demonstrates a person’s symptoms, the level of concern, and the corresponding BAC at each stage of drinking:[/vc_column_text][vc_single_image image=”5069″ img_size=”full” alignment=”center”][vc_column_text]Ultimately, it’s important to keep in mind that everyone doesn’t reflect the same BAC after four drinks, for example. Want a rough estimate based off of gender, weight, type of drink, number of drinks, and time spent drinking? Use the BAC Calculator from Aware Awake Alive to gauge your blood alcohol concentration. 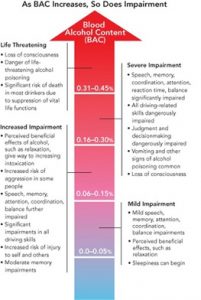