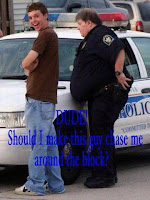 64 vehicles were sent into secondary screening.

3 arrests were made for driving under the influence.

1 arrest for possession of a controlled substance.

Cars Sent to Secondary for Evaluation: 31